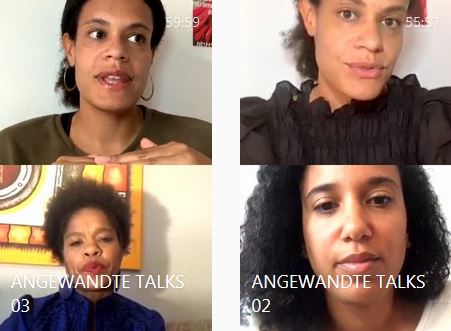 Between June and August 2020 Mahret Ifeoma Kupka, the curator of LIFE DOESN’T FRIGHTEN ME. MICHELLE ELIE WEARS COMME DES GARCONS, has invited different protagonists in order to discuss diversity in the art and fashion world. The focus of the discussions lie on the Black Body in exhibition spaces. Her first guest was the collector and fashion icon Michelle Elie. They talked about Black Lives Matter and what the movement has to do with the exhibition at the Museum Angewandte Kunst.

Her next guest was Yvette Mutumba co-founder and editor-in-chief of the art magazines Contemporary And (C&) and Contemporary And (C&) América Latina. She is currently also a guest lecturer at the Institute of Art in Context at University of the Arts Berlin and newly assigned Curator at Large at the Stedelijk Museum Amsterdam. The talk was about Western museums and art collections and their approach to inclusion and diversity. It was held in German.

For the third edition of our new ANGEWANDTE TALKS series Mahret Ifeoma Kupka talked to Natasha A. Kelly about her award winning video work „Millis Awakening“. It is about eight Black women, living in Germany and working in an art context. In interviews with Kelly, they report on how they have overcome the common colonial stereotypes and have formed their own self-determined identity as Black Women within the white German majority society, on their challenges in and with German art institutions, visual representation and political and social exclusion. The work was part of the 10. Berlin Biennale and it was on display at the MMK Tower exhibition „Because I Live Here“ in 2019. Kelly has a PhD in Communication Studies and Sociology with a research focus on colonialism and feminism. Born in the UK and bred in Germany the author, curator and lecturer has taught at numerous universities in Germany and Austria. As Research Assistant at the Centre for transdisciplinary Gender Studies at Humboldt-University Berlin (2010 – 2013) she dealt with the decoloniality of knowledge, power and beings. The talk was held in German.

For the fourth edition of our new ANGEWANDTE TALKS series Mahret Ifeoma Kupka, the curator of LIFE DOESN’T FRIGHTEN ME. MICHELLE ELIE WEARS COMME DES GARCONS, talked to Sakhile Matlhare about her art gallery Sakhile&Me in Frankfurt and her experiences as an upcoming gallerist working in the fields of contemporary Art from Africa and its diasporas. Sakhile&Me is a contemporary art space working with young and established international artists, creative entrepreneurs and curators. The gallery promotes the work of artists and expands their visibility on the continent and abroad through group and solo exhibitions, art fair participation, placement of works in private and public collections and cooperation with other galleries. They also engage audiences on an interactive level through expert lectures and talks, explorative workshops and publications. Matlhare holds a doctoral degree from Northwestern University and wrote her dissertation on how contemporary artists work alongside art curators, historians, gallerists and other experts in the gatekeeping process within and beyond the rubric of contemporary African art. The talk was held in English.

The first guest after the Summer Break was artist and art historian Tasnim Baghdadi. Since 2018 she has been working mainly as an art educator at Fondation Beyeler in Riehen/Basel, where she is responsible for the conception of various mediation formats as well as for the editing of exhibition texts and publications. She also works as a freelance author. Her most recent article, to be published in autumn 2020, deals with colonial continuities in museums of modern art in German-speaking countries and the question of strategies for dealing with the colonial past and its epistemic implications within current institutional practice.